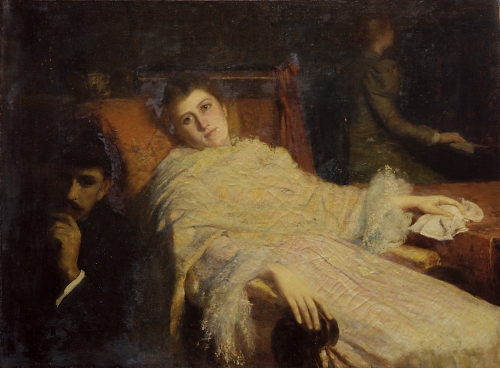 The work of Thomas Hovenden typifies nineteenth century American genre painting that reflected the renewed, democratic spirit for the country’s citizens. Hovenden originally hailed from Ireland, born in Dunmanway, a small village in County Cork.  He was orphaned as a young infant and with his coming of age, he served as an apprentice to a framemaker and woodcarver who paid for his earliest art instruction.

As a young man of 23, Hovenden arrived in America, settling in New York, where he made a living as a gilder and framemaker while attending evening classes at the National Academy of Design.  He also worked as an illustrator for Harper’s Magazine.(1)  His paintings during these years included detailed narrative scenes focusing on one or two figures often domestic in nature, thereby prefiguring the subject matter that would later define his canvases.

He moved from New York to Baltimore before spending six years in France.  He initially sought instruction from the renowned peasant painter Jules Breton, but transferred to the studio of Alexandre Cabanel.  The majority of Hovenden’s years in France were spent at the art colony at Pont-Aven in Brittany.  Like so many other American expatriate artists, Hovenden found the French peasantry ample subjects to be explored through genre painting.

Soon after returning to the United States in 1880, Hovenden returned to a version of genre that reflected his American surroundings and the political environment.  His work also became more personal in nature.  He settled with his new wife (Helen Corson, a painter of animal images and fellow Pont-Aven art colony member) to her family’s property at Plymouth Meeting, Pennsylvania, and quickly became part of the local population.  His wife’s family had been abolitionists and their property served as part of the Underground Railroad.

Hovenden exhibited his canvases widely and his work found worthy patrons who provided him with an established source of income and reputation during his lifetime.  In 1886, Hovenden replaced his friend Thomas Eakins at the Pennsylvania Academy of the Fine Arts as a professor of Painting and Drawing.(2)  Unfortunately tragedy curtailed his successful career and life when he was killed trying to save a little girl who stood before a speeding train.

The subjects Hovenden captured after returning from France in 1880 reflect his academic instruction, and his attention to detail was employed through his careful application of paint.  He tended to focus on portraying the tranquil domestic life of the working classes in nineteenth century America and he infused his canvases with easily recognizable narratives.  Painting with an acquired sense of realism, Hovenden developed his subjects in order to create a sense of drama.  The tradition of genre painting in America had been developed throughout the nineteenth century before Hovenden’s move to the forefront.  Throughout the century artists painted rather idealized compositions whose frequent explorations of domestic harmony encouraged viewers to react emotionally.

Often American genre painting reflected a sense of optimism and nationalism fueled by the democratic experience at hand.(3)  With the upheaval of the Civil War years, images of home life succeeded in providing a sense of comfort and sanctuary to a primarily middle class audience.  As early as the 1830s, the artist William Sidney Mount began including African Americans as primary subjects within his narrative compositions. Hovenden followed a painting tradition initiated after the Civil War that depicted sentimental scenes of people who had served as slaves.  For whatever reason, possibly his wife’s abolitionist ties or even as his transfer of peasant subject matter from France to an American equivalent, Hovenden found individuals from the African American population to model for his paintings during the 1880s and they became integral to his genre scenes of home and family.  The Museum’s painting Contentment certainly follows Hovenden’s template for his pictorial narratives.