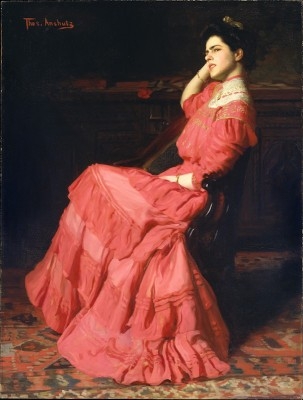 A native of Newport, Kentucky, Thomas Anshutz was known primarily for his paintings of female figures, usually isolated in a contemplative or coquettish pose. However, his most famous canvas is atypical of his work and was an industrial genre piece titled “Steelworkers-Noontime,” completed in 1882.

He became a long-time teacher at the Philadelphia Academy of the Fine Arts and had the dark palette and realistic approach to figure painting of his teacher, Thomas Eakins.

He arrived in New York in 1873 to study at the National Academy of Design under Lemuel Wilmarth. Two years later, he continued his studies at the Pennsylvania Academy under Thomas Eakins and Christian Schussele, and in 1881, joined the Academy faculty as a replacement for Eakins who was fired for using nude models in female student classes. However, he kept in the curriculum the emphasis on anatomy in the tradition of Eakins. In 1909, he became Head of the Pennsylvania Academy.

In 1885, Anshutz went to Paris to the Academie Julian and then returned to the Pennsylvania Academy faculty for the remainder of his active career. He was regarded as a solid painter who did major studies for each canvas. Noted students were Robert Henri, John Sloan, George Luks, William Glackens and Daniel Garber.