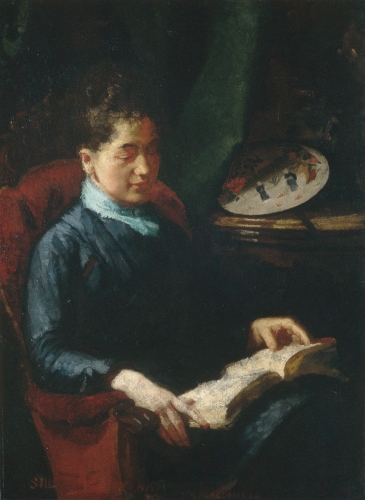 Susan Hannah MacDowell Eakins is not as well known as her husband, Thomas Eakins, the great American realist who was asked to resign from his teaching job at the Pennsylvania Academy for encouraging his women students to draw from the completely nude male model. Although he regarded her as perhaps the best woman painter of the period, she subordinated her career to his and is only now getting the recognition she deserves.

Susan Hannah MacDowell, the fifth of eight children, grew up in Philadelphia. Her father, William MacDowell, an avowed liberal and freethinker, gave his children considerable freedom and encouragement. A respected engraver, he was in contact with many Philadelphia artists. MacDowell permitted his daughter to set up her studio in the attic, and he and other members of the family posed for her frequently.

In 1876, Susan MacDowell first saw Thomas Eakins at the Hazeltine Gallery, where his painting of a surgical operation, The Gross Clinic (1875), was shocking Philadelphia with its bloody realism. She was impressed at once and decided to study with him at the Pennsylvania Academy. MacDowell was twenty-five when she enrolled at the Academy in 1876, and she studied there for the next six years. One of Eakins’ finest students, she was the first winner of the Mary Smith prize, as well as a leader of the student body.

MacDowell became Eakins’ loyal confidante and they were married in 1884. After their marriage, she continued to paint sporadically, but loyally took over all tasks necessary to free her husband for time in the studio shipping his work, answering correspondence, and entertaining the students, guests, nieces, nephews, cats, and dogs (and even a monkey) that kept their home bustling.

Susan Eakins became a staunch and good-humored ally for her husband and helped him survive the tense and difficult years after he was asked to resign from the Academy. Because of his uncompromising realism and his insistence on the use of the nude model, the narrow-minded Philadelphia art community ostracized him. Frozen out by dealers and critics, he barely sold anything during his lifetime.

Susan Eakins was a voracious reader and theater-goer, and an accomplished pianist who frequently held informal musicales at their home, which sometimes became the settings for her husband’s pictures. She was also a photographer, and promoted the Philadelphia Salon of Photography. Like her husband, she used her photographs as reference material for her paintings. It is believed that some of the photographs thought to be by Thomas Eakins may, in fact, be hers.

Throughout their marriage, both artists had separate studios in the house. Eakins greatly respected his wife’s work and once said that she knew more about color than he did. After his death in 1916, she returned energetically to painting, producing a considerable body of work during the 1920s and 1930s. Once she began painting again, she hardly left her studio, until at age eighty-six a fall left her dizzy and somewhat crippled.

Art historian Susan Casteras has analyzed the changes in Susan Eakins’ style. As a student and during her marriage, she adopted the sober realism of her husband, the rich earth tones, and even the grave mood, which may be seen in Two Sisters (1879). This dignified image is built up with the curves and arcs of female bodies and growing plants.

When left on her own, without the tragic intensities of her husband’s nature to influence her, Susan Eakin’s natural temperament seems to have emerged. She was basically a “joyous and very giving individual not especially receptive to the darker vision of life”. The Lewis Sisters at Home (1932) shows her informal, looser, and brighter late style, with a vivid red, blue, and yellow flashing out from a dark background. The draftsmanship here is weaker, however, — the figures have less structure than in her earlier work.

A fascinating comparison may be made between Thomas Eakin’s famous portrait head of his wife and her portrait of him. He portrays her mobile, sensitive face concerned and aware of tragedy cocked slightly to one side, listening with compassion to him. In her painting of him, he is boyish and warm, ready to pour out his troubles. He leans forward informally in work cloths — the arcs and curves of his body and surrounding forms suggesting a person of sensuality and earthiness played off against the cross of his easel.

Susan Eakins deliberately avoided promoting herself. When artist William Sartain wrote a sketch of her husband in 1917 for Art World, Sartain wanted to include the statement “He married Susan MacDowell, an artist of talent . . . ,” but Susan asked him to remove the sentence.

In 1973, thirty-five years after her death, Eakin’s first one-woman exhibition at the Pennsylvania Academy took place, and her work is now being recognized for its solid craftsmanship and fine composition. At a 1976 exhibition of nineteenth century women artists, she was singled out by art critic Lucy Lippard, who described her work as “incisive and adventurous, full of both life and thought”