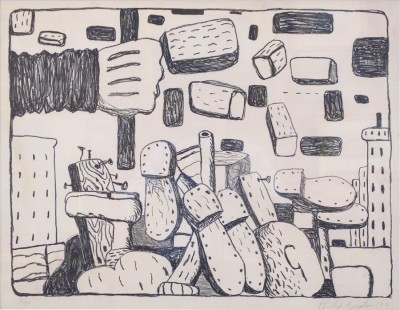 Born in Montreal, Canada, Philip Guston had a career that vacillated between deeply intense figurative painting and totally abstract painting. He remains well known as one of the leading Abstract Expressionists of the 1950s and 1960s and for his paintings in the last part of his career that combined expressionism and realism. Influences in addition to Abstract Expressionism were paintings by Renaissance Masters, California surrealism and 1930s Mexican muralism.

When Guston was six years old, he moved to Los Angeles with his Russian immigrant parents. In high school, he was a friend of future gestural painter Jackson Pollack, and the two of them got into trouble for circulating a satirical pamphlet and were expelled from school. As an adult Guston continued his focus on social issues, and joining the John Reed Club, aligned himself with left-wing political causes.

To earn money while painting on his own as a young man, Philip Guston worked as a movie extra. He was primarily a self-taught painter except for three months of study at the Otis Art Institute. Major influences during that time were modernists Lorser Feitelson and Reuben Kadish. Guston created a mural panel about American Negroes in American society and depicted a Ku Klux Klansman whipping a black man who had been tied up. Angry local authorities destroyed the mural.

Guston’s 1934 travels in Mexico where he observed muralist work, especially that of David Sisqueros, reinforced his interest in creating large murals with strong political-social messages. Reuben Kadish was Guston’s traveling companion on this trip, which included the painting of a mural in the former summer palace of Emperor Maximilian.

In 1935, he went to New York City and did representational art including WPA murals for the 1939 World’s Fair, the Queensbridge Housing Project in New York City in 1940 and the Social Security Building in Washington DC in 1942. He also did easel paintings beginning 1940, including “Bombardment”, which was a political statement about the Spanish Civil War.

In the late 1940s, Philip Guston turned to abstraction with symbolism rooted in the mysteries of a child’s world expressed in flattened forms. His first solo exhibition was 1945, and that year he won first prize in the Carnegie Institute annual exhibition. Shortly after, he traveled in Europe and in 1950, settled in New York City. He turned from figurative painting to Abstract Expressionism including a series of “white paintings” that had geometric constructions combined with color and brush-work derived from impressionism. His work grew increasingly large and abstract with heavy texture and much grey and black color.

Then In the 1970s, he returned to figurative painting and increasingly more to recognizable subjects and messages hearkening back to his earlier period of narrative comment on societal subjects. Some of his paintings had common objects, disembodied, and references to urban ugliness and “menacing, gangster-like figures in a deliberately awkward style.” (Zellman 953)

Philip Guston combined teaching with his painting career and was a member of the faculties of Yale and Columbia Universities and the University of Iowa. From 1973 until his death in 1980, he taught at Boston University and became an influential figure in Boston art circles.

In 2005, California collector and real-estate developer Edward R. Broida gave a gift of 36 works by Philip Guston to the Museum of Modern Art in New York City. Included are twelve paintings, sixteen drawings and eight prints dating from 1938 to 1980. 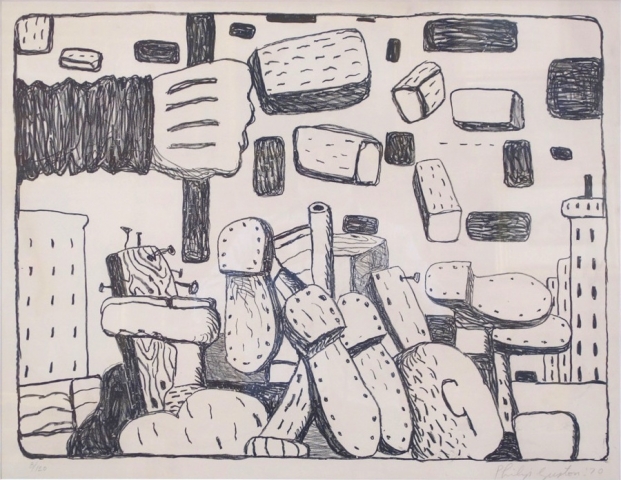