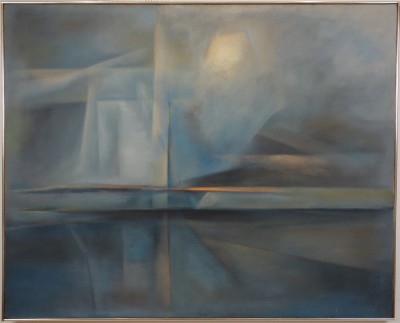 One of eight children, Merton Simpson was born in 1928 and grew up in Charleston, South Carolina. While hospitalized with childhood diphtheria, he took to drawing. His talent was soon recognized by several Charlestonians, among them William Halsey, an artist who gave private instruction to the young Simpson.

While working with Halsey, Simpson also worked at the Gibbes Museum, the only African American in the still segregated institution. Though not an orphan, Simpson was also a member of the Jenkins Orphanage Band, another important early experience, as music has been a lifelong inspiration to the artist.

Simpson moved to New York in 1948 where he studied at the Cooper Union and at New York University, where one of his professors was Hale Woodruff. He also worked at Benevy’s Frame shop, an experience Simpson calls his “real college.” There he met artists Hans Hofmann, Max Weber and others who would encourage him by commenting on his work. His confidence was further bolstered when one of his works, ‘Nocturnal City’, was exhibited at the Metropolitan Museum of Art in 1952.

College was interrupted when Simpson joined the Air Force in 1951. Designated an official Air Force artist, he painted portraits of officers including one of General Eisenhower, and he also played in a jazz combo on the base. After concluding his military service in 1954, Simpson returned to New York to resume his studies and employment at the frame shop.

Simpson continued to paint and his work was included in two very noteworthy museum exhibitions-’Younger American Painters’ at the Guggenheim Museum in 1954 and ‘Eight New York Painters’ at the University of Michigan in 1956. During this period he began looking at African sculpture, and in 1954, he opened his Madison Avenue gallery which concurrently featured African art and modern art.

In 1959, he took his first trip to Europe, primarily to see the best in African art, but he also relished being among the expatriate African-American writers, artists and musicians living in Paris including the writer, James Baldwin; artists, Larry Potter, Beauford Delaney and Herbert Gentry; and musicians, Count Basie, Thad Jones and the Mel Lewis Orchestra.

In 1963, Simpson was invited to join a group of African-American artists to meet to discuss how they could contribute to the civil rights movement. The result of the meeting was the formation of the Spiral Group, which Simpson joined along with Romare Bearden, Norman Lewis, Charles Alston, Hale Woodruff, Richard Mayhew, Emma Amos, Alvin Hollingsworth, Reginald Gammon and others.

For Simpson, this heightened sense of social consciousness led to his ‘Confrontation series’ (1964-69), a group of mostly black and white canvases which expresses the anger and frustration of the times.

In the 1970s, Simpson traveled extensively in West Africa in search of African art. In so doing, he strongly connected to Africa and to his own heritage. This was a vital and meaningful period in Simpson’s life for not only did his knowledge of African art expand, but his political and social consciousness was raised in a way which would greatly affect his later work.

In the 1980s, Simpson created two series of work which reflect his great love of music and jazz in particular. ‘Universal Orchestrations’ and ‘Contemporary Melodies’ both consist of works that exhibit free flowing and spontaneous brush strokes; not coincidentally, these works were created during a time when Simpson was actively playing a lot of jazz, both in New York and in Paris.

By the 1990s Simpson’s work began to evolve in a way that not only incorporated his musical sensibility but also his appreciation of African art. He added elements of collage to his paintings using fragments from West African hunting cloth which were used to wrap tribal objects during shipments from Africa. In so doing, the works gained a sculptural quality reflective of tribal art.

In addition to his artwork, Simpson has also become a dealer of African art. In 1995, the Gibbes Museum of Art in Charleston presented a retrospective exhibition and published a catalogue entitled ‘Merton D. Simpson, The Journey of an Artist’. He has also had gallery exhibitions in May and September 2002. On October 28, 2002, the Studio Museum in Harlem honored Merton D. Simpson along with Gwendolyn Lawrence and Richard Yarde, for his work as an artist, humanitarian and his role in the proliferation of African-American art.