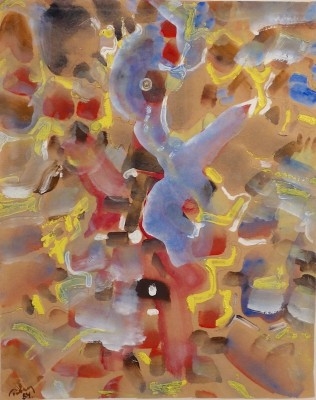 A painter of small abstract works with underlying religious themes as well as illustrator and muralist, Mark Tobey remains known primarily for his “white writing” paintings that give the impression of being expansive and much larger than they actually are. Tobey is sometimes categorized with the Abstract Expressionists, but in fact he was isolated spiritually and physically from its New York founders because of his immersion in Asian religion and major time spent in Europe and the Pacific Northwest.

Encountering the Bahai World faith in 1918 and later Zen Buddhism was pivotal to Mark Tobey’s life and work in which he expressed themes of oneness and progression. As a result of his obvious commitment to spiritual aspects of painting, he has had a prestigious reputation as a modernist but is perhaps more appreciated in Europe and Asia than in America. Of modern American art, he said: “There have been 32 isms since the advent of cubism, . . . we have just been confused by the storm. . . we forget that there are today great men in the religious field with as much to offer. . .religion like science must be balanced to bring men to a state of equilibrium and that and that only will bring peace.” (Herskovic 338)

Mark Tobey was born in Centerville, Wisconsin, and raised in the Midwest, lived in Indiana and Chicago where he briefly attended the Art Institute School. He worked as a commercial illustrator, and from 1911 to 1922, worked in New York City where he did fashion illustration and caricature for McCalls magazine and other publications. He also took private lessons from Kenneth Hayes Miller.

With a keen interest in philosophy and religion, especially beliefs of the Orient and Middle East, Mark Tobey’s official affiliation with non-western religions began in 1918 when he converted to the Bahai faith and joined their World Church. Then between 1923 and 1931, he lived in several places including Seattle, Paris, New York City and Chicago. In Seattle, Tobey studied Chinese brush-work with Teng Kuei. From 1931 to 1938, he lived in England, where he was resident artist at the progressive school, Darlington Hall, near the town of Darlington. After that, until 1960, when he moved to Basel, Switzerland, Mark Tobey lived in Seattle where he was close to persons of Asian culture.

His painting subjects included portrait and genre scenes, but after 1935, he developed his signature technique of “white writing”, described by scholar Matthew Baigell as a “tangle of thin, continuous linear strokes” linked to Oriental calligraphy and created from his desire not to be bound to realistic form. “For him, the white lines symbolized light as a unifying idea which flows through the compartmental units of life.” He avoided focal points in his paintings and let the lines blur so that the overall canvas became a symbol “of the unity of forms and movements in the universe rather than an example of traditional organization hierarchies in which dominant elements brought lesser ones into subordination.” His paintings reflect substance but not solidity, a sense of “cosmic wholeness, suggesting matter, space with nonspace and indivdual stroke with the totality of the pictorial field”. 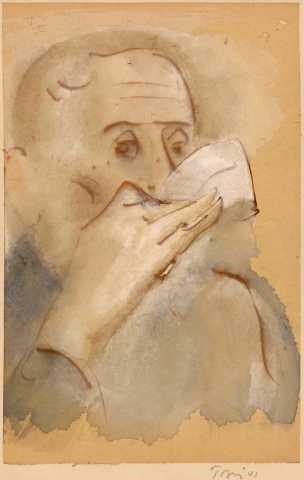