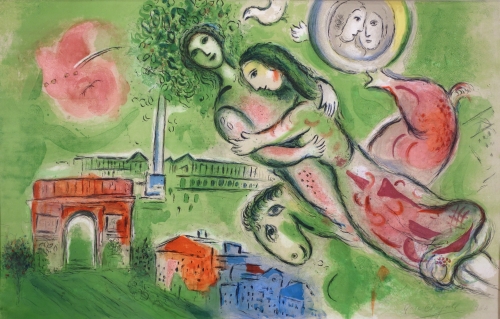 Marc Chagall was a man of keen intelligence, a shrewd observer of the contemporary scene, with a great sympathy for human suffering. He was born on July 7, 1887 in Vitebsk, Russia; his original name was Moishe Shagal (Segal), but when he became a foremost member of the Ecole de Paris, he adopted French citizenship and the French spelling of his name. Vitebsk was a good-sized Russian town of over 60,000, not a shtetl. His father supported a wife and eight children as a worker in a herring-pickling plant.

Sheltered by the Jewish commandment against graven images, the young Marc Chagall never saw so much as a drawing until, one day, he watched a schoolmate copying a magazine illustration. He was ridiculed for his astonishment, but he began copying and improvising from magazines. Both of Marc Chagall’s parents reluctantly agreed to let him study with Yehuda Pen, a Jewish artist in Vitebsk. Later, in 1906, they allowed their son to study in St. Petersburg, where he was exposed to Russian Iconography and folk art. At that time, Jews could leave the Pale only for business and employment and were required to carry a permit. Marc Chagall, who was in St. Petersburg without a permit, was imprisoned briefly.

His first wife, Bella Rosenfeld, was a product of a rich cultivated and intellectual group of Jews in Vitebsk. Marc Chagall was made commissar for the arts for the area, charged with directing its cultural life and establishing an art school. Russian folklore, peasant life and landscapes persisted in his work all his life. In 1910, a rich patron, a lawyer named Vinaver, staked him to a crucial trip to Paris, where young artists were revolutionizing art. He also sent him a handsome allowance of 125 francs (in those days about $24) each month. Marc Chagall rejected cubism, fauvism and futurism, but remained in Paris. He found a studio near Montparnasse in a famous twelve-sided wooden structure divided into wedge-shaped rooms. Chaim Soutine, a fellow Russian Jew, and Modigliani lived on the same floor. To the artist’s astonishment, he found himself heralded as one of the fathers of surrealism. In 1923, a delegation of Max Ernst, Paul Eluard and Gala (later Salvador Dali’s wife) actually knelt before Marc Chagall, begging him to join their ranks. He refused.

To understand Marc Chagall’s work, it is necessary to know that he was born a Hasidic Jew, heir to mysticism and a world of the spirit, steeped in Jewish lore and reared in the Yiddish language. The Hasidim had a special feeling for animals, which they tried not to overburden. In the mysterious world of Kabbala and fantastic ancient legends of Marc Chagall’s youth, the imaginary was as important as the real. His extraordinary use of color also grew out of his dream world; he did not use color realistically, but for emotional effect and to serve the needs of his design. Most of his favorite themes, though superficially light and trivial, mask dark and somber thoughts. The circus Marc Chagall views as a mirror of life; the crucifixion as a tragic theme, used as a parallel to the historic Jewish condition, but he is perhaps best known for the rapturous lovers the artist painted all his life. His love of music is a theme that runs through his paintings.

After a brief period in Berlin, Marc Chagall, Bella and their young daughter, Ida, moved to Paris and in 1937 they assumed French citizenship. When France fell, Marc Chagall accepted an invitation from the Museum of Modern Art to immigrate to the United States. He was arrested and imprisoned in Marseilles for a short time, but was still able to immigrate with his family. The Nazi onslaught caught the artist in Vichy, France, preoccupied with his work. He was loath to leave; his friend Varian Fry rescued him from a police roundup of Jews in Marseille, and packed him, his family and 3500 lbs. of his art works on board a transatlantic ship. The day before he arrived in New York City, June 23, 1941, the Nazis attacked Russia. The United States provided a wartime haven and a climate of liberty for Marc Chagall. In America he spent the war years designing large backdrops for the Ballet.

Bella died suddenly in the United States of a viral infection in September 1944 while summering in upstate New York. Marc Chagall rushed her to a hospital in the Adirondacks, where, hampered by his fragmentary English, they were turned away with the excuse that the hour was too late. The next day she died.

The artist waited for three years after the war before returning to France. With him went a slender married English girl, Virginia Haggard MacNeil; Marc Chagall fell in love with her and they had a son, David. After seven years she ran off with an indigent photographer. It was an immense blow to Marc Chagall’s ego, but soon after, he met Valentine Brodsky, a Russian divorcee designing millinery in London (he called her Fava). She cared for him during the days of his immense fame and glory. They returned to France, to a home and studio in rustic Vence. Marc Chagall loved the country and every day walked through the orchards, terraces, etc. before he went to work.

Marc Chagall died on March 28, 1985 in the south of France. His heirs negotiated an arrangement with the French state allowing them to pay most of their inheritance taxes in works of art. The heirs owed about $30 million to the French government; roughly $23 million of that amount was deemed payable in artworks. Marc Chagall’s daughter, Ida and his widow approved the arrangement. 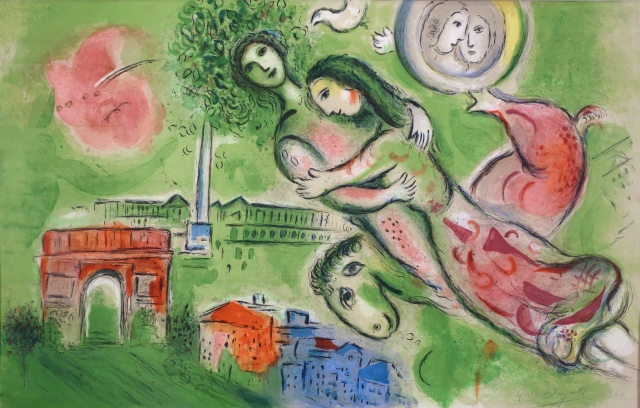