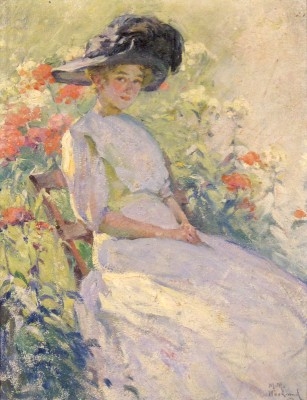 Born in Providence, Rhode Island, Mabel Woodward was an Impressionist painter of simple palette who specialized in colorful beach and other recreational scenes. She was also a long-time teacher (25 years) at the Rhode Island School of Design and there started The Action Class, a pioneering idea whose purpose was to study the human figure as a machine rather than a stationery object. She traveled to Europe but spent most of her summers in Ogunquit, Maine. She was also a frequent visitor to Provincetown, Massachusetts where she painted many street and beach scenes.

She got her early art training at the Rhode Island School of Design and continued her studies at the Art Students League in New York with William Merritt Chase, Frank DuMond, and Kenyon Cox. She worked with Du Mond in Old Lyme, Connecticut and attended the Ogunquit School as a student of Charles Woodbury.