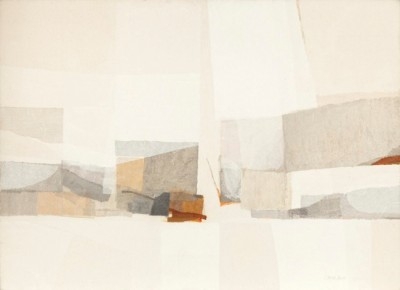 Kenzo Okada was born in Yokohama, Japan on September 28, 1902, the son of a wealthy industrialist. He enjoyed a privileged life in Japan. He attended Tokyo Fine Arts University where he painted in traditional realist style. Despite his parents’ apprehension toward his career in art, he went to Paris in 1924 and studied with fellow Japanese expatriate, Tsuguji Fugita. In 1927 he returned to Japan.

Kenzo Okada came to the United States in 1950; before that move his forms were derived from landscapes and figures. But for a man who ulimately decided that he wanted to paint the interior of his own mind, the object merely inhibited the necessary flight of fancy. And so he turned to abstraction, with the flavor of Japan still in it. When he and his wife, Kimi, were not in their Greenwich Village apartment, they were apt to be in an old frame house near Albany, New York. He worked on as many as five canvases at a time, wandering from one to another in bare feet. He had no advanced knowledge of how his canvas should come out, and thus his composition could grow naturally.

Okada’s work has been credited with forming a bridge between the abstract qualities found in Eastern and Western art. He became a United States citizen in 1960. He died on July 25, 1982 in Tokyo.