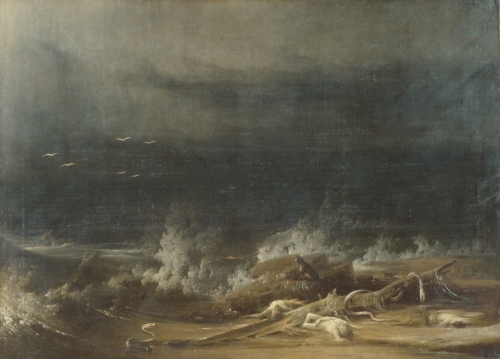 Born in Bellingborough, Lincolnshire, England, Joshua Shaw became a painter of romantic, generic rural landscapes with darkened foregrounds, often with figures, and streams and distant hills. He was among the earliest pure landscape painters in America, and his style was related to the 17th-century idealized landscapes of Claude Lorraine, showing people at ease in the countryside. It was a style replaced in popularity by the French Barbizon School painters whose figures were engaged in more realistic hard-working activity.

Referring to this group of ‘pure’ landscapists, which included George Harvey, Robert Salmon, Charles Birch and Charles Codman, John Baur, Curator of the Whitney Museum of American Art, said they were obscure painters who relied “on infinitely subtle variations of tone and color. . . .Spiritually they were the lyrical poets of the American countryside and the most sensitive to its nuances of mood.” (Luhrs, 36)

Shaw lived in England until he was age forty one, and growing up in poverty, taught himself to draw and shoot guns when he was young. He first apprenticed to a sign painter, although he was basically self-taught as a painter. Described at this period of his life as having “a career of many ups and downs”, he worked as a sign painter in Manchester and also did portraits, landscapes, and genre pieces. Recognized for talent, he exhibited paintings at age 22 at the Royal Academy in London.

However, he found greater opportunity when he emigrated to Philadelphia in 1817, having been commissioned to oversee the installation of Benjamin West’s painting, Christ Healing the Sick, at the Pennsylvania Hospital. He also had another motive for coming to America, and that was to establish the necessary two-year residency to obtain a patent on his invention of a copper percussion cap for guns, an invention that took many years for him to get credit and profit.

From Philadelphia in December, 1819, he set out with his teenage son to create watercolor images, which engraved in aquatint by John Hill, were published in 1820 as a book, Picturesque Views of American Scenery. The father and son traveled to South Carolina, Georgia, North Carolina and Virginia, and among their subjects were the burning of Savannah, Georgia of January 11, 1820; and scenery on the Reedy River and in Table Rock of South Carolina. In North Carolina, they pictured the Catawba River, and in Virginia, the Natural Bridge and Harper’s Ferry. In addition to their efforts resulting in the scenery book, they also gathered data for a United States Directory, published in 1822.

Returning to Philadelphia, Joshua Shaw painted over two-hundred oil paintings. Stylistically he had to make his way, as there was no ‘school’ of landscape painting in Philadelphia when he arrived. He founded the Artists’ Fund Society and the Artists and Amateur Association and exhibited at the Pennsylvania Academy. He published a manual for artists. An inventor, he made improvements on firearm designs and also did early topographical views.

About 1843, he settled in Bordentown, New Jersey, but he was not very successful selling paintings during his lifetime and died in poverty.