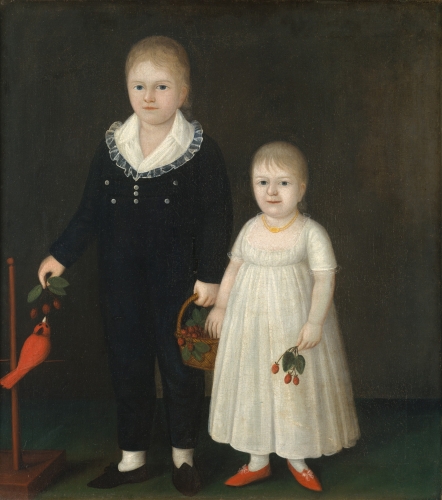 Reportedly America’s first professional black artist that was a free man, Joshua Johnson, whose name is written both as Johnson and Johnston, was originally from the West Indies and then came to the American South. He was an itinerant portrait painter among wealthy plantation owners in Maryland and Virginia, and his style was derived from the conventional English portrait style of bust-length poses and arranged backdrops. His portrait figures are stiff, prim and flat in appearance, and quite often have a dog posed on the lap of the sitter.

He was the first known African-American professional portrait painter to work in the United States. According to his advertisement in the Baltimore Intelligencer, December 19, 1798, he was a “self-taught genius.”

He was listed in the Baltimore directory as a portrait painter, 1796 to 1824, and after 1824, his name disappears from public record. Likely he was influenced by Charles Peale Polk, a Baltimore painter, and one scholar, Caroline Weekly in Antiques Magazine of September 1987, suggested that he was brought to Baltimore as a young slave-child by artist Charles Peale Polk, brother-in-law of Charles Willson Peale. The will of Charles Peale Polk mentioned an unnamed Negro boy as does correspondence of the artist.

Although much speculation exists and much research has been done, little factual information is known about Johnston’s actual birth place and his early life. Possibly he purchased his freedom with his art work as an entry in the Baltimore Directory of 1816-1817 lists him as a “Free Householder with Colour.”

Of his found work, there is one signed portrait whose subject is Mrs. Sarah Ogden Gustin and 82 attributed paintings that indicate he had a career full of commissions from wealthy Baltimore families.