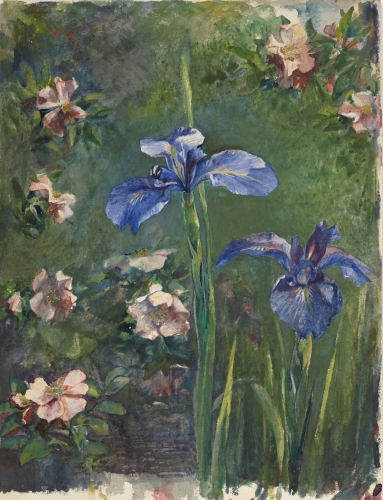 John LaFarge was born in New York City in March 1935 of French descent and Roman Catholic background which was unusual at the time. He graduated from Mount St. Mary’s College in Maryland. His ties with France were strengthened by a lengthy European grand tour following his graduation from college; he was much impressed by the stained glass in the medieval architecture. In Paris, he studied with Thomas Couture and with Ruskin, who focused on the importance of art being morally and spiritually uplifting.

Shortly after he returned to the United States, LaFarge abandoned the study of law and moved to Newport, Rhode Island to study painting with William Morris Hunt. His influences were the Japanese prints, found in abundant number in his parents’ home and the flower paintings of Fantin-Latour. He also painted landscapes with some little success. But not much in sales, and he abruptly shifted his attention to decorative work, winning commissions for murals and painted decorations for churches and buildings. It set a new direction in American art and initiated the movement now known as the American Renaissance.

It was through his involvement with decorative art LaFarge produced his most original achievement, the invention of opalescent stained glass. He employed a jumble of contrasting textures, colors and materials unlike any that had been used in stained glass before. By the 1880s he had become a well-known figure in the New York social world as well as an artist very much in demand. The pressure of work exacted its toll on his personal relationships. His life became divided between a bohemian existence in New York City and a proper Catholic household in Newport where his wife brought up their six children. He was involved with a law suit against Louis Tiffany when his wife gave birth to their youngest child, and he had not known of her pregnancy.

In 1886, he escaped from his responsibilities with a trip to Japan with Henry Adams; a stay that, though brief, colored his work for the remainder of his career. In 1890 and 1891 they traveled to the South Seas. In the space of roughly a year there he created several hundred watercolors which he exhibited in New York City in 1895. He also started writing in earnest, completing eight books and publishing several dozen essays. His last creation was a memoir of his friend Winslow Homer, which he wrote on his own deathbed and which was not published until after he died.

Even La Farge’s appearance was exotic, for he had dark olive skin and heavily lidded eyes of an Oriental cast. His cultural, quizzical, reflective approach and his quiet, indirect speech were far from stuffy, and he was fond of limericks, gently malicious gossip and fat cigars. His cultural background, his artistic attitudes and his intensely refined sensibility were in many respects at odds with the dominant tendencies of American life. Yet no other artist of the 19th century so enriched American culture and none so inventively transformed an enormous range of media.