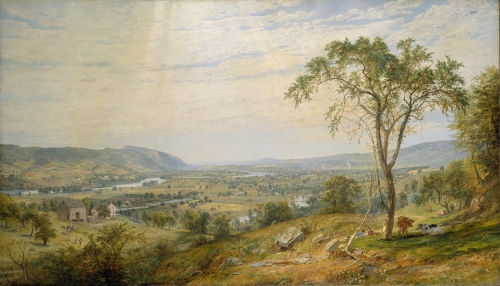 Jasper Francis Cropsey, in the company of Frederic Edwin Church, Asher B. Durand, and John F. Kensett, was one of the most respected painters of the Hudson River School. At the peak of his career—from the mid-1840s through the 1870s—Cropsey enjoyed fame in both England and the United States for his views of American scenery, particularly his richly colored canvases capturing the glories of the American autumn.

Born on Staten Island, New York, on February 18, 1823, Cropsey trained to be an architect. At the age of thirteen he made and submitted a scale model of a country house to the annual exhibition of the Mechanics’ Institute in New York City. His model won a medal and brought the youth to the attention of New York architect Joseph Trench. Cropsey served a five-year apprenticeship with Trench, who encouraged him to embellish his architectural drawings with landscape backgrounds and figures. To this end, Trench enabled Cropsey to study drawing with the landscape painter Edward Maury.

Although the practice of architecture supported Cropsey throughout the 1840s, it was the rendering of his designs on paper rather than the design process itself that ignited his passion. His success with the watercolor medium kindled a desire to paint with oils, which Cropsey took up in 1841. He learned to handle the new medium by copying from existing works of art, which included his own watercolors as well as Dutch paintings and engravings of paintings by Claude Lorrain.

In 1843 he participated for the first time in an exhibition at the National Academy of Design. He was made an associate of the Academy the following year on the merits of View of Orange County with Greenwood Lake in the Distance. Cropsey had discovered Greenwood Lake in southeastern New York State by 1843. He opened a studio there and began submitting views of the lake to various exhibitions in New York. Cropsey’s attachment to the area was an enduring one. In 1866, he purchased a forty-five-acre tract outside the village of Warwick near Greenwood Lake where he constructed Aladdin, a 29-room Gothic Revival mansion with studio.

Following his marriage in the spring of 1847, Cropsey and his bride, Maria Cooley, embarked upon a two-year European honeymoon. They spent the summer in England before traveling through Italy with American painters Christopher Pearse Cranch and Thomas Hicks and sculptor William Wetmore Story. During a lengthy stay in Rome, Cropsey worked out of the former studio of Thomas Cole, the founding father of the Hudson River School.

Upon his return to the United States in the summer of 1849, Cropsey settled down to painting as a full-time occupation. He shared a studio with Edwin White at 114 White Street in New York City, where he taught and worked up his European sketches into finished oils. His pupils included the gifted American landscapist David Johnson. Cropsey made frequent sketching trips to the White Mountains, the Catskill Mountains, Greenwood Lake, and Newport, Rhode Island. This productive and rewarding period culminated in Cropsey’s rise to academician status in the National Academy in 1851.

In June 1856 the Cropseys again went abroad, this time renting a home and studio in the Kensington section of London. The artist arrived with commissions from American patrons for paintings of castles and abbey ruins, thus he traveled a great deal through the English countryside. He found, in turn, that his American subjects were just as eagerly desired abroad. The London printer Gambert and Company commissioned thirty-six views from Cropsey for publication in American Scenery.

During his seven years in England, Cropsey kept company with leading figures in the British art world, including the director of the National Gallery, Sir Charles Eastlake, and author John Ruskin, leader of the Pre-Raphaelite movement, who influenced a generation of American and British painters through his advocacy of painting natural objects in their natural settings. While abroad, Cropsey began exhibiting the autumnal scenes that would become his hallmark. His monumental Autumn—On the Hudson River of 1860 (National Gallery of Art, Washington D. C.) was lauded by Queen Victoria and the London press, earning Cropsey trans-Atlantic repute as “America’s painter of autumn.”

Shortly after his return to America, Cropsey undertook American Autumn, Starruca Valley, Erie Railroad, a large painting celebrating a prosperous nation newly at peace. A chromolithograph after the painting was published by Thomas Sinclair of Philadelphia, which immediately put Cropsey’s work within easy reach of a mass market. He was commissioned by Milton Courtright to paint Valley of Wyoming (1865, Metropolitan Museum of Art, New York), a painting measuring seven feet in width. The sale of these paintings gave him the money necessary to build Aladdin.

By the 1880s, Cropsey could no longer afford what had become an extravagant lifestyle. Aladdin was sold by his creditors, and in June 1885 the Cropseys settled in a modest home in the town of Hastings-on-Hudson, New York. Cropsey began painting the Hudson River and the Palisades, the rocky outcroppings on the Hudson’s west bank that are visible from Hastings. Although his landscape subject matter remained the same, his palette became increasingly high-keyed as a result of his contact with the English Pre-Raphaelites.

Cropsey died at Hastings-on-Hudson on June 22, 1900. His home there has been preserved as a center for the study of Cropsey and his art.

Cropsey was a founding member of the American Water Color Society in 1866. His other memberships included the Century Club, the Lotos Club, the Pennsylvania Academy of the Fine Arts and the Artists Aid Society. Major examples of his work are in the collections of the Museum of Fine Arts, Boston; Peabody Institute, Baltimore; the New-York Historical Society; Harvard University, Cambridge, Massachusetts; the Metropolitan Museum of Art, New York; and the National Gallery of Art, Washington, D. C.