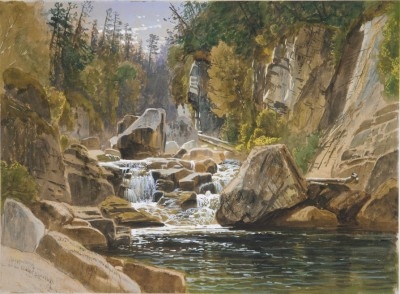 A native of New York and the son of an engraver, James David Smillie earned his early reputation for his etching skills but later for watercolor landscapes. He began etching at age 8, learning from his father, James Smillie (1807-1885).

At age 14, he did a set of plates illustrating John Milton’s epic poem, Paradise Lost. He had a job as a bank note engraver, and then he and his father had a business, collaborating as engravers with a specialty of bank-notes. They also did the engravings for the 1857 Mexican Boundary Survey Report.

James David Smillie helped organize the New York Etching Club, and he was the U.S. representative to supply examples of American etchers’ work to the Painters-Etchers Society of London.

Although he continued working with etching, drypoint, aquatint and lithography, in 1865, he began doing landscape painting and was especially interested in mountain scenery.

Smillie traveled in California in the Sierra Nevada Mountains, in Colorado in the Rocky Mountains, and in the eastern United States in the Catskills and Adirondacks. From these trips he did illustrations that were published in 1872 in the magazine Picturesque America.

In 1881, Smillie got married, and the couple had two sons. By 1884, he was in France, and spent much time there doing prints of landscapes, figures, portraits and cityscapes. Between 1888 and 1896, he produced a set of drypoint floral still-life prints.

James David Smillie founded the American Watercolor Society and served as president and treasurer. He also taught classes at the National Academy of Design in 1868 and from 1894 to 1903.

Source:
Peter Falk, Who Was Who in American Art