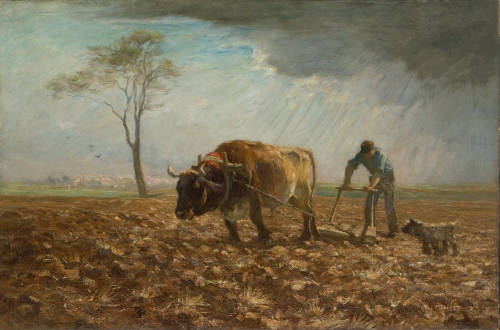 Horatio Walker (1858-1938) came from his native Canada to America in 1885. He was trained in England and France, then became active in the Rochester Art Club. In 1882 he was secretary of that organization, and three years later he became president. That year he exhibited ‘Landscape with Cattle” the genre he would become known for.

He painted in the Barbizon School tradition. Already in 1891 he became a National Academician. Walker exhibited regularly at the Boston Art Club (1884-1909), at the Art Institute of Chicago (1888-1927) and elsewhere. At the Paris Universal Exposition of 1889 he won a medal for ‘A Stye’ (unlocated) and a gold medal at the World’s Columbian Exposition in 1893 for ‘A Stable Interior’ (Art Gallery of Ontario, Toronto).

More gold medals followed: at the Pan-American Exposition (1901), at the St. Louis Universal Exposition (1904) and at the Panama-Pacific International Exposition in San Francisco (1915). Walker’s painting ‘The First Snow’ was donated to the Memorial Art Gallery of the University of Rochester in 1914, upon the inaugural summer exhibition, one of several contemporary works that launched the museum’s permanent collection.