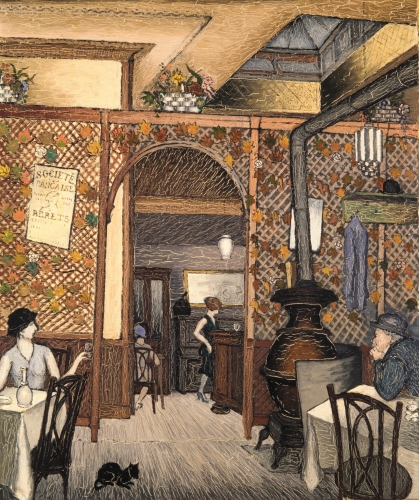 Glenn Coleman’s life and art demonstrate the difficulties that often seem to adhere to the artist’s calling. He was born in Springfield, Ohio in 1887, living until only the age of 45, dying on Long Island, New York in 1932 after a period of financial struggle and changing art tastes that effected both his style and subject matter, as well as the response to his art.

Coleman had a talent for drawing, which earned him a position as an apprentice artist for an Indianapolis newspaper while still a teenager. He went to New York City in 1905, where his life became a struggle to find time to paint while trying to survive by working at any job he could find, and studying for a short time with Ash Can artists Everett Shinn and Robert Henri.

Glenn Coleman identified with the poor because he was one of them. Because of this struggle his and theirs he became interested in socialism, selling drawings to the socialist magazine, “The Masses”. His painting were deeply felt reflections of everyday life in the off-beat nooks and crannies of Greenwich Village, Chinatown and the river. Here life was lived in a nearly small town setting, while uptown skyscrapers dwarfed humanity, and all around a great urban metropolis sprawled

Strangely, it was the towering architecture of this metropolis, at the expense of his personal depictions of simple, struggling humanity that, in the mid-1920s, began to evolve into the dominant direction of his art. Cubism intruded itself into Coleman’s style, as it had so many other artists, but it was startling to see a move from a manifestation of Ash Can realism to a form of stylized abstraction. As this transition was taking place, the artist apparently tried to reach back to his earliest artistic concerns, making realistic lithographs from his youthful drawings of people in the city that, unfortunately, failed to attract any interest in the surging, rapidly-changing, hurly-burly of modernist styles.

Moving to Long Island in the year of his death, Coleman appeared to want to re-ground himself in nature, painting the landscape there, but he did not live long enough to accomplish this.