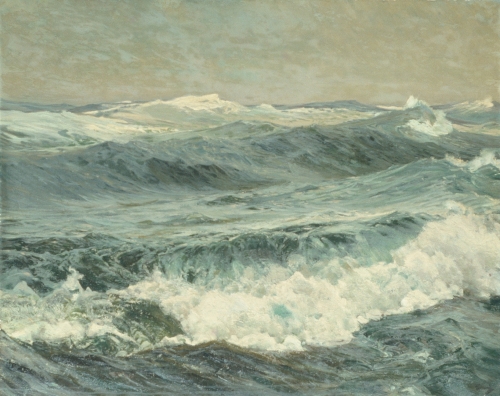 A noted seascape painter especially of surf churning against white froth on seaside rocks, Frederick Judd Waugh strove to convey the powerful movement of the water and the smell of the brine. He was also an illustrator, a writer of children’s books, a bookplate designer, a designer of silver and copper objects, and a camouflage artist during World War I.

He was born in Bordentown, New Jersey, and was the only child of painter Samuel Bell Waugh by his second wife, Mary Eliza Young, who was a miniature painter. He grew up in the atmosphere of the studio, and both he and his half sister, Ida, became painters.

He was trained at the Pennsylvania Academy of the Fine Arts from 1880 to 1883 and studied with Thomas Eakins. He continued his studies at the Academie Julian in Paris and exhibited at the Paris Salon. He returned to Philadelphia in 1885, the year his father died, and remained until 1892 painting portraits and landscapes and doing commercial work for the firm of Dakin and Petrie.

In 1892, he married Clara Eugenie Bunn, whom he had met at the Pennsylvania Academy, and in that same year, they began a fifteen-year sojourn in Europe. They lived primarily in London from where he did many paintings of the Channel Island of Sark and at St Ives, Cornwell. He also did illustrations of the Boer War for Lord Northcliffe, the publisher of the London Daily Mail.

In 1907, after two of his seascapes were rejected by the Royal Academy, the couple returned to the United States. Ironically, these paintings became an instant success in America. In 1929, he won the Palmer Memorial Marine Prize of the National Academy of Design.

He died in Provincetown, survived by a son Coulton, who drew the newspaper comic strip called “Dickie Dare”.

Much of this information was provided by Peggy Frazier of Danville, California, who has done research on Samuel and Frederick Waugh.