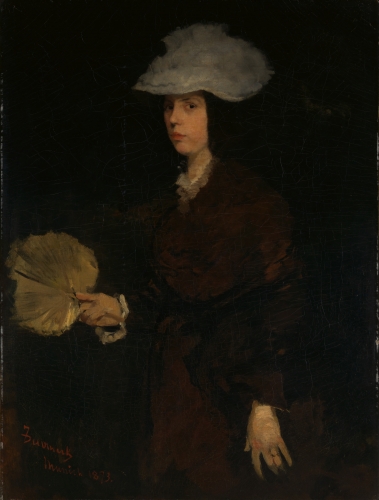 Born in Covington, Kentucky, Frank Duveneck had the birth name of Frank Decker. He became a well-trained academic painter whose work ranged from single figures in interiors to plein air canvases of figures in landscape and often included the depiction of low-life persons. His styles included Realism, Social Realism, and Impressionism, and his work was ever influenced by the dark tones and vigorous brush-strokes of the Munich style, which he learned at the Munich Academy in the 1870s. Art historian Matthew Baigell described Duveneck’s mature style as having “loose highlights brushed over ruggedly blocked-out forms emerging from a richly suggestive chiaroscuro.” (106)

He apprenticed to a church decorator, Wilhelm Lamprecht, in Cincinnati, and worked in Catholic Churches in Covington, Cincinnati, Latrobe, Pennsylvania and Quebec, Canada. At age 22, entered the Royal Academy of Munich where he intended to further his interest in church decoration but instead veered to fine-art painting on canvas. One of his most influential teachers was realist Wilhelm von Diez, and Duveneck, also impressed by the realism of French painter Gustave Courbet, became known for adopting this revolutionary approach with rich brushwork. In Munich, Duveneck shared a studio with William Merritt Chase.

Returning to Cincinnati, he painted portraits and decorated churches and also taught art classes. At first he did not gain much attention, but an exhibition in Boston in 1875 gained him good attention.

In 1875, he went back to Europe and opened an art school in Munich and also in Poling in Bavaria, and many Americans who became known as “Duveneck’s Boys,” studied with him. Several years later, he opened his school in Italy where he spent the winters in Florence and the summers in Venice. In 1879, he and his followers went to Venice where he began etching and briefly shared a studio with James Whistler in order to learn from him. He also did sculpture. During this period, his painting changed drastically from dark interiors with heavy, impasto paint to outdoor, plein air painting in much lighter colors giving the appearance of sunlight. Among his students was the future Impressionist painter John Henry Twachtmann, and also Elizabeth Boott, whom he married in 1886 and who died two years later.

In 1888, he returned to Cincinnati where from 1900 he taught at the Cincinnati Art Academy. He spent the summers in Gloucester, Massachusetts painting impressionistic landscapes and seascapes, and he also made many return trips to Italy, France, and Germany.

The Cincinnatti Museum is the major recipient of his paintings as he took a strong, active interest in that entity.