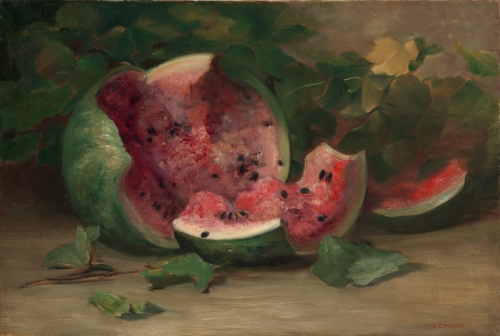 Mounting racism certainly was a barrier that narrowed the range of employment and limited the satisfaction that would result from work, but it was somewhat more permeable for Blacks with unique talents or abilities. Such a person was Charles Porter, who has recently been rediscovered as a major 19th painter. Only a small portion of his works are known today, and what we do have tends to be work done in old age after the height of his creative vigor had already passed.

Porter’s family had lived in Hartford since the 18th century, but his father moved to a house in Rockville while Charles was a young boy. It appears that, although Porter kept a studio in a tower on a Rockville hilltop not far from his family’s home, by 1877 he had also established a studio in downtown Hartford in the tower of the Cheney Block on Main Street, and by then he had also exhibited.

Thanks to the sponsorship of Mark Twain, Porter was able to go to Paris in 1881-84, where he came under a variety of influences and was able to reach the heights of his ability.

Although Porter’s personal life is a bit obscure, it is evident that he encountered a city in which racism was increasing in intensity. Porter was acclaimed by the press and was awarded important prizes, but after settling in Hartford (he actually spent time travelling and also working in his New York and Rockville studios – until the latter was hit by lightening), his race began to result in social isolation.

A Bavarian artist who shared his studio, Gustave Hoffman, had to sell Porters paintings door to door because no one would buy the work of a Black man. It is said that a significant part of his output in these years still hang unrecognized on the walls of Hartford homes. By the time of his death in 1923, racism had cast him into complete obscurity, and it was only very recently that he is once again recognized as one of the country’s outstanding late nineteenth-century artists.