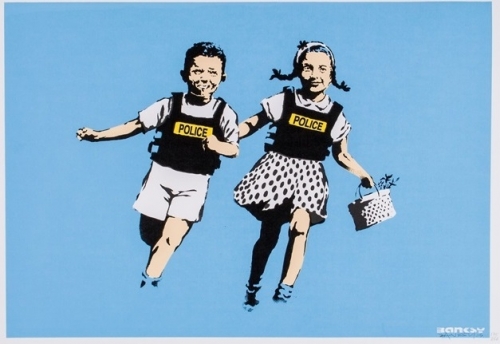 A prolific British graffiti artist, political activist and painter, he combines dark humor with graffiti done in a distinctive stenciling technique. His works of political and social commentary have been featured on streets, walls, and bridges of cities throughout the world.

According to author and graphic designer Tristan Manco, Banksy “was born in 1974 and raised in Bristol, England. The son of a photocopier technician, he trained as a butcher but became involved in graffiti during the great Bristol aerosol boom of the late 1980s.”

Banksy started as a freehand graffiti artist as one of Bristol’s DryBreadZ Crew (DBZ), with Kato and Tes. He was inspired by local artists and his work was part of the larger Bristol underground scene. From the start he used stencils as elements of his freehand pieces, too. Banksy’s stencils feature striking and humorous images occasionally combined with slogans. The message is usually anti-war, anti-capitalist or anti-establishment. Subjects often include rats, monkeys, policemen, soldiers, children, and the elderly. Not surprisingly, his work has stirred up discussion and controversy around the world.

In 2003 in an exhibition called Turf War, held in a warehouse, Banksy painted on animals. He later moved on to producing subverted paintings; one example is Monet’s Water Lily Pond, adapted to include urban detritus such as litter and a shopping trolley floating in its reflective waters; another is Edward Hopper’s Nighthawks, redrawn to show that the characters are looking at a British football hooligan, dressed only in his Union Flag underpants, who has just thrown an object through the glass window of the cafe. These oil paintings were shown at a twelve-day exhibition in Westbourne Grove, London in 2005.

In August 2004, Banksy produced a quantity of spoof British Â£10 notes substituting the picture of the Queen’s head with Princess Diana’s head and changing the text “Bank of England” to “Banksy of England.” A limited run of 50 signed posters containing ten uncut notes were also produced and sold by Pictures on Walls for Â£100 each to commemorate the death of Princess Diana.

In August 2005, Banksy, on a trip to the Palestinian territories, created nine images on Israel’s highly controversial West Bank barrier. Banksy held an exhibition called Barely Legal, billed as a “three day vandalised warehouse extravaganza” in Los Angeles, on the weekend of September 16. The exhibition featured a live “elephant in a room”, painted in a pink and gold floral wallpaper pattern.

In April 2007, Transport for London painted over Banksy’s iconic image of a scene from Quentin Tarantino’s Pulp Fiction, with Samuel L. Jackson and John Travolta clutching bananas instead of guns.

In late August 2008, marking the third anniversary of Hurricane Katrina and the associated levee failure, Banksy produced a series of works in New Orleans, Louisiana, mostly on buildings derelict since the disaster. His first official exhibition in New York, the Village Pet Store And Charcoal Grill, opened October 5, 2008. The animatronic pets in the store window include a mother hen watching over her baby Chicken McNuggets as they peck at a barbecue sauce packet, and a rabbit putting makeup on in a mirror.

On June 13, 2009, the Banksy UK Summer show opened at Bristol City Museum and Art Gallery, featuring more than 100 works of art, including animatronics and installations; it is his largest exhibition yet, featuring 78 new works. He created 10 street pieces around Park City and Salt Lake City for the world premiere of the film Exit Through the Gift Shop at the Sundance Film Festival in Park City, Utah, on January 24. In April 2010, Melbourne City Council in Australia reported that they had inadvertently ordered private contractors to paint over the last remaining Banksy art in the city. The image was of a rat descending in a parachute adorning the wall of an old council building behind the Forum Theatre.

Banksy has self-published several books that contain photographs of his work in various countries as well as some of his canvas work and exhibitions, accompanied by his own writings: 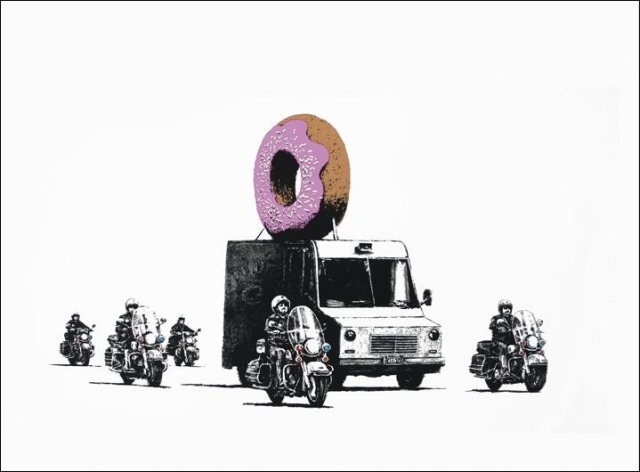 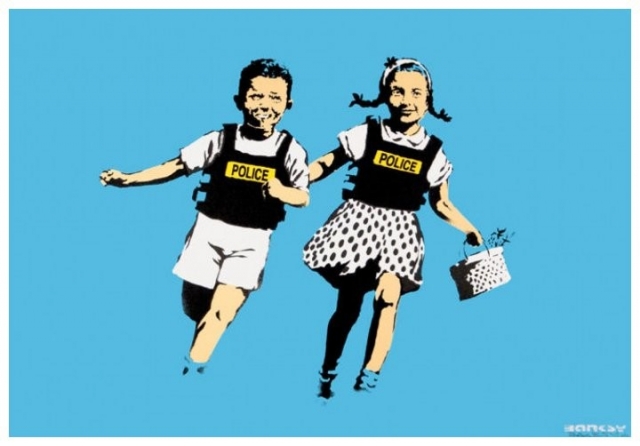