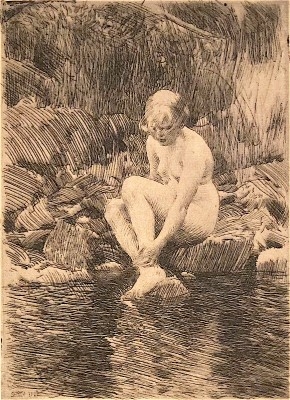 Anders Zorn was internationally famed as one of the best genre and portrait painters in Europe at the end of the 19th century. He is famous for his paintings of the people of Dalarna, the part of Sweden where he was born, and his nudes in the open space. He earned a world-wide reputation as a portraitist. He made seven journeys to the USA. He painted the portraits of three US presidents. He belonged to the group known as the Opponents, headed by his friend and fellow-painter Ernst Josephson. They rebelled against the academic autocracy and conservative thinking at the Academy of Fine Arts in Stockholm.

Anders Zorn is one of Sweden’s’ internationally best known artists. His fame abroad is founded mostly on his portraiture where he had the ability to capture the character and the personality of the depicted person. But also his graphic work, where he is among the most talented of all times, is well-known. In Sweden his nude studies are very famous, as are his genre pictures which mostly depict working people.

Zorn was born in Mora, the son of Grudd Anna Andersdotter and German brewer Leonhard Zorn, who never married her, whom Anders Zorn never met, and who died in Helsinki in 1872. Zorn was raised by his grandparents in Mora and at the age of 12 he was sent to a school in Enkoping. At the age of 15 he entered the Royal Academy of Art in Stockholm. As a young boy he had shown an unusual artistic ability and attention was drawn to the horses and human figures he carved in wood. He planned to become a sculptor but soon painting prevailed. He choose watercolors, a technique which was rather uncommon at the time and this became his main technique until about 1887. At the Student exhibition in 1880, Zorn showed the watercolor ‘In Mourning’, which propelled him into the art world. The painting shows a young girl in mourning and it was admired for its skilfulness; the way he painted the sad young face under the veil.

Several members of Stockholm society now turned to Zorn with commissions. His portraits of children were much appreciated and it was in connection with such a commission that Zorn met his future wife, Emma Zorn, in the beginning of 1881. Her background was quite different from Zorn’s. She came from a rich family in Stockholm, with an interest for art and culture. Her Jewish ancestors were among the first to settle in Sweden. Emma Lamm’s family liked the charming young man but he and Emma understood that without money of his own a marriage was out of the question.

In August 1881, Zorn went abroad to study and to try to earn enough money to support a family. The next four years were spent mostly in England and Spain, but during the summers he was always at home, in Mora and in Dalarna where the Lamm family rented a summerhouse. During these years his style matured. His technique became more sure and his way of handling watercolors became bolder. He began to study the appearance of water, how its surface fluctuated and reflected.

In the autumn of 1885, Anders Zorn and Emma Lamm married. The following eleven years were mostly spent abroad, first in England, later in Paris, but they always came back to Sweden during the summers. The first years of their marriage were highly stimulating for Zorn’s painting. Emma Zorn’s encouragement and critical analysis of his work played a decisive role in his artistic growth. It was during these years that his ability as an aquarellist reached its peak. Some of the most appealing paintings he made during this period are those with water motifs such as a series depicting the beautiful light over the harbor of Constantinople.

Emma and Anders Zorn spent the winter of 1887-88 in St. Ives in Cornwall. This was an artistic turning point for Zorn. He began to paint in oils and the second oil painting he made, A Fisherman in St Ives, was a definite success. It was exhibited in the Paris Salon in 1888 and bought by the French state. In the spring of 1888, the Zorns settled in Paris, which became their home for eight years. This period coincided with some of the high points of his artistry. From 1889 to 1894 he produced a number of works which earned him a prominent position in the Parisian art world. This position was confirmed during the Paris World Fair in 1889. The 29-year-old Zorn was awarded the French Légion d’Honneur and was asked to paint his self portrait for the Uffizi Gallery in Florence.

It was primarily his skill as a portrait painter that gained Zorn international acclaim. His incisive ability to depict the individual character of his model is, for example, apparent in portraits of prominent cultural personalities, ‘Antonin Proust’ (1888) and ‘Coquelin Cadet’ (1889). The sitter’s surroundings were important; Zorn believed that a portrait should be painted in an environment that was natural for the model. An artificial studio environment was not to his taste.

During the summers in Mora, Zorn painted some extraordinary works where light plays a decisive role, foremost Midnatt (1891) with a woman rowing in the shadowless summerlight and in Margit (1891) a Dalarna girl braids her hair in the rays of light from a small window.

At about the same time that Zorn moved to Paris he began working with the motif that he became renowned for, the nude depicted outdoors. The movement of water and the reflection of light on its surface had long fascinated him. Now he further complicated the situation by placing a model beside or in the water. The first works he completed in this genre are Ute (1889), ‘En premier’ (1888) and Les Baigneuses.

In 1893, the Columbian World Fair was held in Chicago. Zorn was chosen as the superintendent of the Swedish art exhibition and travelled to the States. He stayed for almost a year. This trip to the USA, the first of seven, was very important for him. Zorn enjoyed the US lifestyle and felt at home there. This first trip to the States was also of great importance for his art. Subsequent visits to the USA were in 1896-1897, and 1898-1899, 1900-1901, 1903-1904, 1907, and 1911. He generally traveled during the fall, winter and spring. The 1907 trip was primarily for pleasure, but the others included a large number of paintings, mostly portraits. Naturally, the high points were the commissions to portray US presidents: ‘Grover Cleveland’ (1899) and his wife ‘Mrs. Frances Cleveland’ (1899) and ‘William Taft’ (1911). He made an etching of Theodore Roosevelt in 1905. One of the benefits of the presidential portraits was the number of commissions that Zorn received in the USA.

In 1896 the Zorns decided to move home to Sweden. Zorn had earlier bought land adjacent to Mora church. A cottage from his grandfather’s farm was moved here and this is still the center of the Zorngarden, which was enlarged on several occasions until 1910. The Zorns were intensely engaged in the welfare of the inhabitants of Mora. Emma Zorn established a reading society, a parish library, a childrens’ home, and the Mora domestic handicraft organisation. The largest gift to Mora was, however, the folk high school they established where young people from the community were educated. Zorn’s interest in traditional culture was expressed in different ways. From 1914 and onwards he bought old cottages and moved to what is now called Zorn’s Gammelgard. In order to preserve the old folk music, Zorn established a music contest in 1906, which resulted in a renaissance of folk music and its ultimate survival in Sweden. Today, the Zorn Award is still the most prestigious prize a folk musician can receive.

The move to Mora from Paris also resulted in a change of motif for Zorn. He did many paintings depicting Mora and its residents, such as his most famous work, Midsommardans (1897) which was also the painting that Zorn himself valued most of all. His love for his native country is also depicted in paintings such as ‘The Shepherdess’ (1908), The ‘Horn Blower’ (1905) and ‘Christmas Morning Service’ (1908). The portrait commissions took a lot of his artistic energy. He developed a concise treatment of detail and a more sweeping brushstroke than earlier. By now his reputation as a skilled portraitist had reached the upper classes. Various members of the Swedish royal family posed for Zorn and the most exquisite of these is Drottning Sophia (1909), with its wonderful use of white. The painting is an outstanding example of Zorn’s mastery of technique.

Beginning in 1910, Zorn focused on developing his control of the technique and motif. He accomplished this with such certainty that the process of painting can assume the dominant role, sometimes to the detriment of the work’s emotional expression. Also the nude studies changed: The rather sturdy peasant women are shown in their own environment in cottages or by the water, e.g. ‘Mother and Daughter’ (1909).

The international esteem Zorn received was not based solely on his paintings. He was an exquisite etcher as well. He had worked with this technique since 1882. He had developed his abilities and was now highly accomplished. Zorn produced 289 etchings, a number of which are very well known, among them the portrait of ‘Ernest Renan’ (1892), ‘Auguste Rodin’ (1906) and ‘August Strindberg’ (1910). Zorn admired and collected the etched works of Rembrandt and considered him to be his artistic forefather in this particular medium.

Zorn’s astounding skill with the etching needle can be partially traced to his ability with a carving knife. As mentioned earlier, he had first intended to become a sculptor. Throughout his life he returned to sculpture and the high point in this particular art is the statue of ‘Gustav Vasa in Mora’, inaugurated in 1903. Zorn also sculpted a number of portraits and small statues, among them ‘Morning Bath’ (1909), a figure of a girl who holds a sponge in her hands from which a fountain spouts.

Zorn’s health deteriorated markedly during his last years. Emma Zorn died on 04 January 1942. To honor the memory of her husband, she had worked to create a museum, which opened in 1939. She completed the existing collection by re-purchasing a number of paintings that he had sold and at the same time she continued the philanthropic work that the Zorns had initiated together. 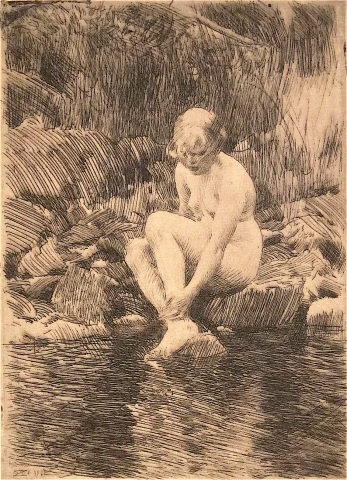