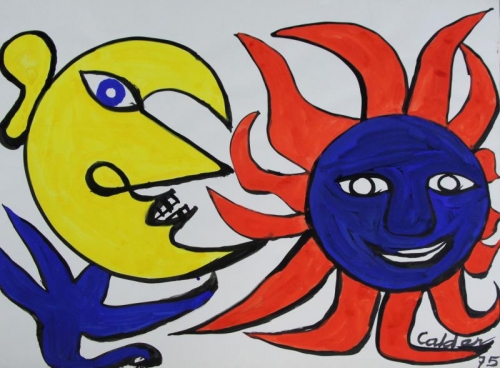 One of America’s best known sculptors, “Sandy” Calder became most famous for his kinetic abstract mobiles. He also did floor pieces, was a painter in watercolor, oil and gouache, did etchings and serigraphs, and made jewelry and tapestries as well designed theater stage settings and architectural interiors.

His art reflects his reputation of being a beloved, decent human being who continually searched for fun and humor in that around him. He was highly independent from luxuries and focused on creativity. His last words, “I’ll do it myself”, tell the story of his life.

He was born in Philadelphia, the son of Alexander Sterling Calder and the grandson of Alexander Milne Calder, well-known sculptors of public monumental works. His mother, Nanette Lederer Calder, was a professional portrait painter. Obviously he was nurtured in an environment of art, and from an early age, he was making figures from found objects. Because of the father’s ill health and the necessity for a drier climate, the family moved to Oracle, Arizona in 1905, and five years later to Pasadena, California. When Sandy was a teenager, the family returned to Pennsylvania.

He was unable to make a decision about a vocation, but his fascination with machines led to his earning a degree in mechanical engineering from the Stevens Institute of Technology in 1919. He tried a variety of jobs including working in the boiler room of a cruise ship. In 1923, he enrolled in the Art Students League in New York City, where his teachers were John Sloan, Guy Pene Du Bois, and Boardman Robinson. In classes there he did numerous oil paintings and also humorous drawings of sporting events for the “National Police Gazette.”

In 1925, he produced an illustrated book titled Animal Sketching, one-line drawings that foreshadowed his early wire sculptures of figures and animals. In 1926, encouraged by an engineer friend of his father to follow his talent, he went to Paris where he lived the next seven years and shortly after his arrival began doing wire sculpture. During this period, his mother gave him seventy-five dollars a month for living expenses.

He assembled a “Circus,” of miniature, hand activated one-wire figures with which he gave performances in his studio. These pieces were made by bending and twisting a single wire into humorous portraits, animals, and figure groups.

He also met many of the leading avant-garde artists of the day including Piet Mondrian, who influenced Calder’s geometric, non-objective constructions that he began producing in 1931. His floor pieces, named “stabiles” by Jean Arp, were exhibited in a gallery exhibition organized by Marcel Duchamp, who coined the word “mobile” for the hanging, kinetic pieces. Soon, Calder was creating many of these wind-driven works.

Calder’s mobiles were first shown in the United States in 1932, and the next year he returned to America and purchased a home in Roxbury, Connecticut where he lived the remainder of his life and gained much attention from that time.

Dancer Martha Graham used several of his sculptures in her modern dance performances, and personnel at the Museum of Modern Art in New York began purchasing pieces from him including his first large-scale piece called Whale in 1937.

During World War II when metal was scarce, he made mobiles and stabiles from carved, painted wood, and in the early 1950s he added to his repertoire wall pieces and mobiles that incorporated sound. Many federal agencies and businesses commissioned works by him, and most major American museums have his pieces in their collections.

His death in 1976 occurred coincidentally with a major retrospective of his work at the Whitney Museum of American Art in New York. 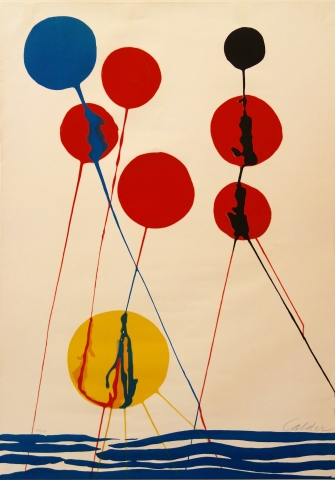